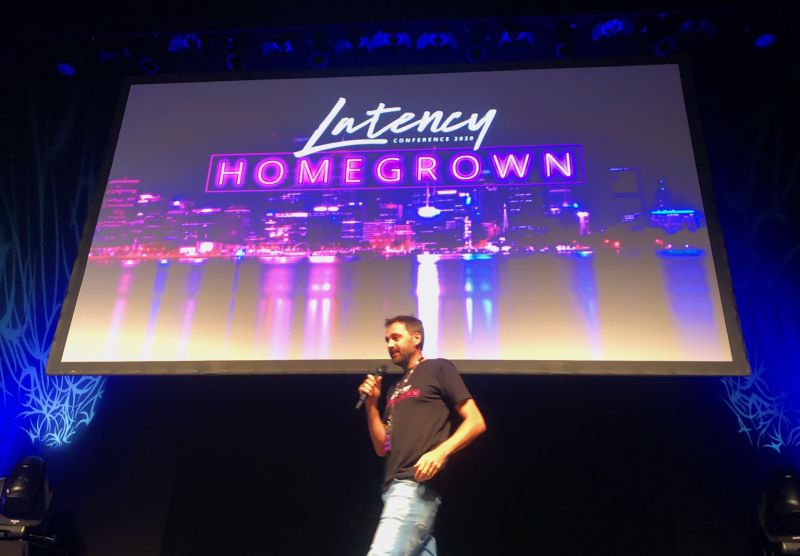 Planning for Latency Conference 2020 started early after the completion of the Latency 2019 event. The success of 2019, meant the committee decided early on to keep the same venue and began progressing all the details in earnest. We secured one amazing international speaker and followed up shortly after by snagging another equally amazing one from the East Coast of Australia.

Things were looking very promising for an even larger, better conference.

In mid January 2020 news reports began to surface of a highly contagious virus spreading quickly in China. By late January, I was returning from an international trip through Hong Kong when I started realising the seriousness of the COVID-19 pandemic. It was unlike anything I had ever experienced and people were scared. My mind wandered to Latency 2020, but at that point, it seemed so far away that it wouldn’t be effected.

Not long after, the virus crept into Australia and the federal government started imposing movement restrictions in response to this faceless threat. On the 5th of April 2020, the West Australian Government, under Mark McGowan, closed its borders for the first time in history to stop the coronavirus spread. This proved a popular but also a very effective move.

But what did this mean for Latency 2020?

With borders closed, no one one was coming in to WA! All the talk indicated borders would be closed until a vaccine could be found and that was likely to take 18 months, if at all! We convened an emergency committee meeting to discuss cancelling the event, going online or continuing as normal. We decided that going online just wasn’t an option for us. In our view, the true value of any conference is the conversations held in the corridors, the networking it provides and the ability to rub shoulders with colleagues you wouldn’t normally get the chance to.

The committee decided we would rather cancel this year if we couldn’t have an in person conference. With community transmission at virtually zero, we still harboured hope, but it was a long shot. We took the stance that if we did cancel, everyone (attendees, sponsors etc) would get a full refund. But that meant no international or national speakers for the first time - we were on our own! It was a big financial risk, but we rolled the dice..

Despite some bleak news from our friends in Victoria, WA experienced no community transmission of the virus, thanks largely to our complete isolation and the policy of shutting borders down. The state government even relaxed restrictions to allow us to hold more people than expected. We were allowed up to 60% of the venue capacity, which we capped at 264. Not as big as previous events, but we were very grateful to be pressing ahead.

Day 1 of the conference arrived after a hectic couple weeks of organisation. But having workshops on Day 1 is a great way to ease into Latency without the stress of having a full house and back to back talks. The State Theatre Centre looked brilliant, especially the stage set up, with our retro #homegrown branding front and centre courtesy of Karen Cheng. My personal highlight of the Workshop Day was the Security Jam delivered by Byron Pogson from AWS. With about 10 minutes remaining, the team “Robert Tables” which had been leading since the start was overtaken on the leaderboard by team “Peanut Butter”, leading to a tense finish. Well done “Peanut Butter” for getting stuck in and not giving up. 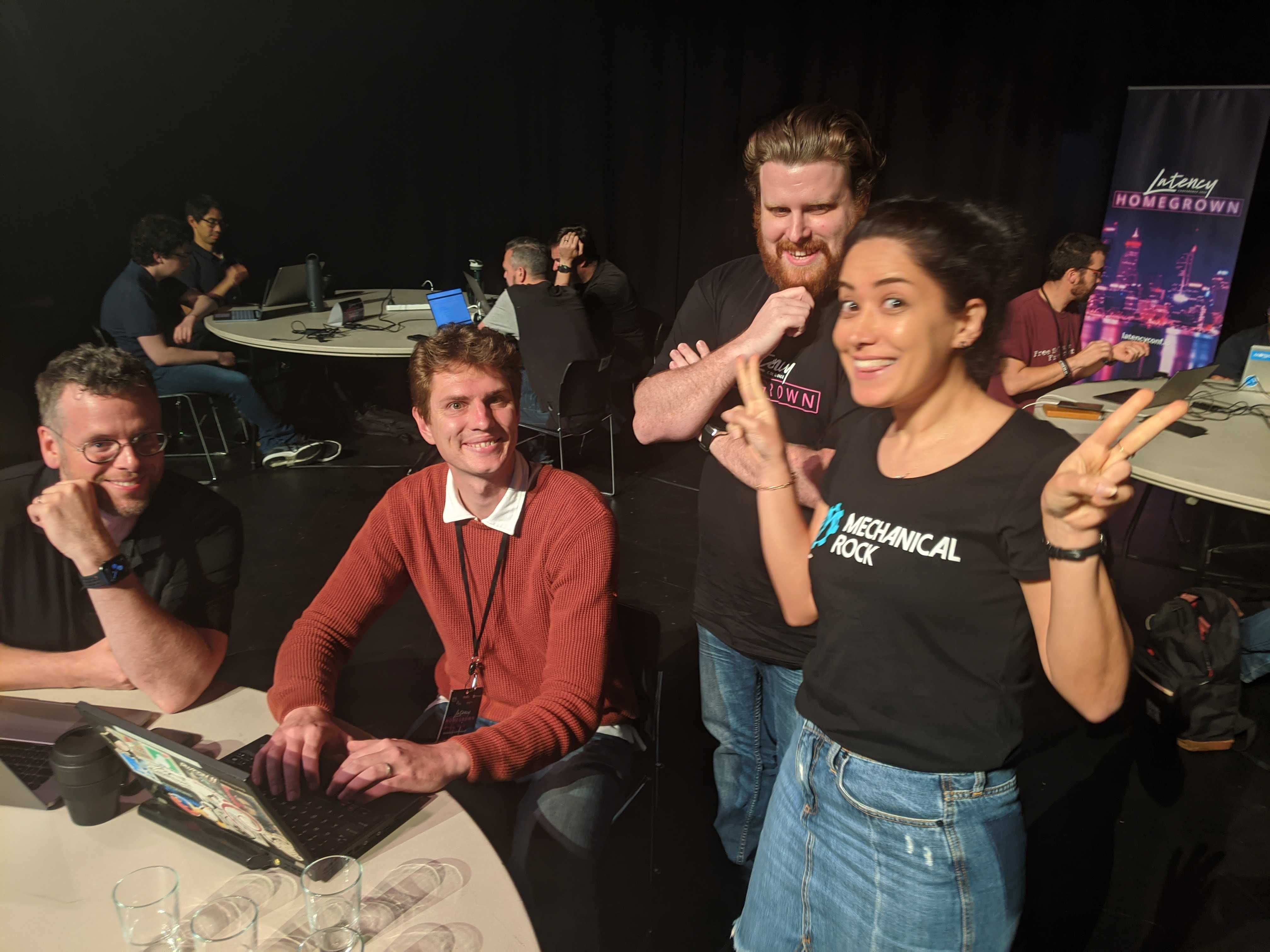 Despite a few sore heads from the organising committee, sponsors and speakers, Day 2, the main event, was upon us. The sight of seeing all those people together chatting whilst lining up for great coffee or speaking to sponsors was an unexpected highlight for me. It was so good to see the community together again.

Unfortunately, I again drew the shortest straw and had been “elected” MC of the day. Unexpectedly, our Welcome to Country had pulled out a couple of days before, but such is the class of our Committee that we were able to secure a new one that morning and we smoothly papered over the fact I had no idea whether we had one or not by passing an index card to me on stage to introduce Betty Garlett to slot into the existing programme. Thank you Valencia (aka Valeria) and Tania for that! And thank you Betty, it was a really lovely way to kick off the conference.

Dr Liz Dallimore, the Director of the WA Data Science Innovation Hub, keynoted proceedings with her talk about using design thinking to enable data science and analytics to solve industry problems. It was a really great way to start, with data being an undeniable theme of the conference. I have lost count of the amount of times I have heard people say “data is so hot right now” in 2020.

We kept the majority of talks a bit shorter this year, aiming for 15 minutes with 5 minutes for Q&A. I think it worked well, keeping the conference moving along. The dreaded pre-lunch slots felt a lot livlier this year and I think that was one of the reasons. Another favourite talk from this year was a homegrown import, Brian Foody. I love how he compared software development and especially “serverless software dev” to compound interest, demonstrating how small changes at the beginning can result in exponential returns.

Adam Simpson, current Premiership Coach of the West Coast Eagles was our conference locknote. If I am totally honest about this, I was nervous. Getting a football coach to speak to a room of Cloud Computing nerds could go horribly wrong. I had chatted to Adam and I knew that data was pretty key to the decision making process at the club, so I tried to persuade him to throw some of that in there. I had no need to be nervous, Adam was sensational. He spoke about Culture and Leadership, which is easily transferrable to industry and then segwayed nicely into how they use data (or don’t) to make decisions. The amount of data and analytics they use was mindblowing and it was a nice way to finish; with an actual end user of the types of systems we build day in day out.

So what did Latency 2020 confirm for me? Well, Perth may never be a San Francisco and I don’t think we want to be, but our tech scene is very much alive and well. If you know where to look, there are some amazing things happening from Oil & Gas, Finance to Football!

Finally, I’d like to thank the entire Latency Committee who worked tirelessly to make this event happen in probably the most trying year of our lives. A special mention to Sarah Wright who really took the reigns this year and ensured that everything went smoothly.

See you next year, maybe.

If you want to check out some of the content from the day, we should be getting the highlights from 2020 up soon on the Latency Conference Site.