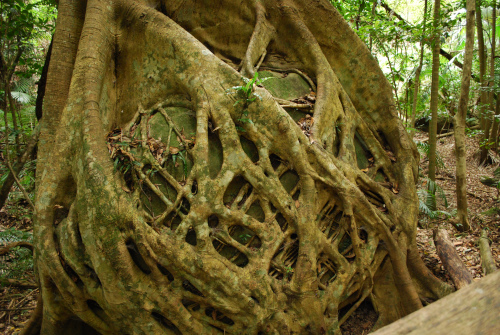 Organisations who face replacing legacy applications often face an impossible choice. Do you pay the high cost of a big-bang rewrite with the inherent disruption of a cutover, or do you keep the legacy application on life support?

Is there a better way? One where you can break apart your legacy monolith. Whilst moving to the cloud. And adopting Cloud Native practices. Maybe there is…

In the modern world of agile development, architecture has no end state. Business must be able to respond to ever changing demands meaning software architecture must be equally adaptive. A modern architecture supports small incremental changes with sufficient feedback loops to evaluate the effectiveness. There are a number of approaches available when dealing with your legacy architecture and moving towards an evolutionary architecture, but one approach I’d like to cover in this post is the Strangler Pattern. I shall give an overview of the strangler pattern and also detail a couple of case studies of where we have applied it successfully.

Infrastructure modernisation offers tangible benefits including reduced operating costs, scalable performance and greater uptime by using technologies such as serverless. However, migrating legacy systems to the cloud is not straight forward. How can we move faster whilst dealing with legacy systems?

You can’t stop everything, down tools and re-write from scratch. What’s more, if you tried you would likely be caught out by the Second System Effect: a re-write shall solve the issues of the past but actually results in bloated complexity and over-runs. “We can solve the issues of the past and re-write the system that took us 6+ years, in 12 months.”. The reality? Eighteen months down the line: you are still building on the original system; the new system supports ~20% of the functionality of the original; technical debt has accrued in the push to deliver; your beautiful clean new architecture has turned into a big ball of mud and what’s more your frustrated customers have left for the nimble upstart that has eaten your lunch.

There are countless examples of how large scale IT rewrite projects fail: both in government and the private sector.

Instead, you need a mechanism to refactor and replace parts of a system whilst maintaining production availability. You require telemetry to evaluate the changes you make.

The strangler pattern provides an approach to controlled re-architecture.

It is not intended to persist indefinitely. Instead it provides a pathway to manage internal change whilst minimising the impact to external dependencies. Once re-architecture has been completed, a key step is the removal of the strangler from your system to simplify and move forward.

Stage 1: Identify the system boundary you want to re-architect.

Stage 5: Clean up the mess.

Stage 6: Migrate clients to the new API and remove the strangler facade

The strangler pattern doesn’t just apply to software architecture, but can be used as part of your cloud migration journey.

We helped one client replatform from an on-premise application servers to containers running on AWS Fargate. The application consisted of a decoupled, event driven, architecture. A dozen or more services in total communicating via a common message bus, with 4 core services containing the majority of the complexity.

The main driver for change was to support an aggressive expansion of the user base. There were a number of challenges with the existing system, complex semantic coupling between the core services meant few members of the team were confident making large scale changes. In addition, the planned expansion of the system brought with it performance and deployment challenges that required cloud scale.

To manage the transition, each service was planned for migration in sequence. The messaging middleware provided a natural integration point for the strangler facade. In order to prevent message pollution from migrated services, a message relay, simulating a data diode, was used to route messages into AWS for analysis without the risk of responses corrupting application state. 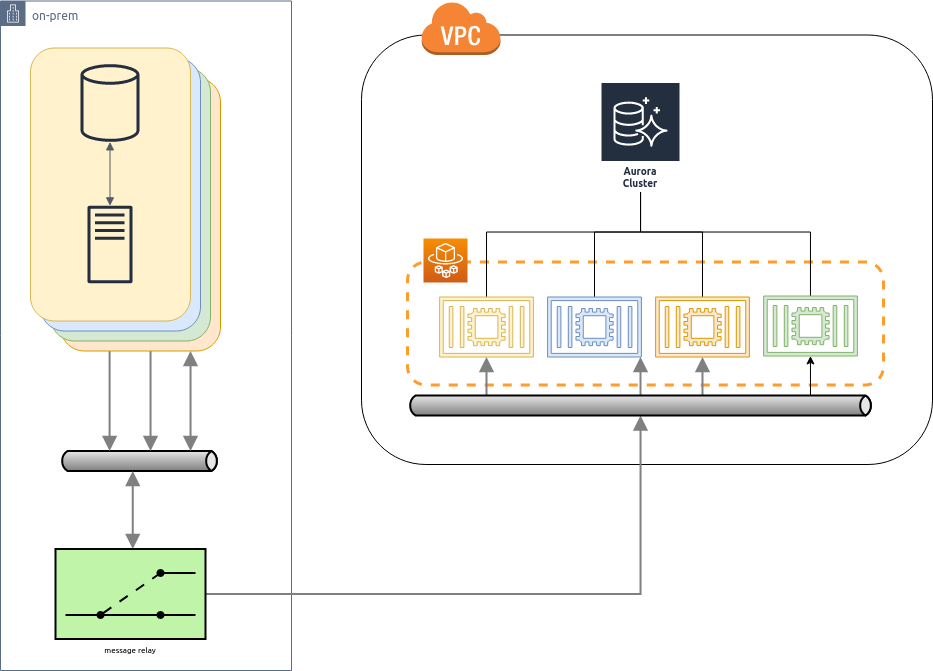 It was not all plain sailing and a number of problems emerged. The migration to containers required an upgrade to the core runtime, which caused knock on issues with the messaging infrastructure, requiring additional effort to maintain compatibility between new an old versions of the service. Wire taps provided insight into the running services but complex internal state meant comparing services was challenging.

However, the strangler pattern enabled us to migrate and observe each service individually, helping to de-risk the move. The use of wire taps provided an insight into the running of the system like never before.

A more common use case for the strangler pattern is re-architecting a monolith legacy application.

We helped to plan the re-architecture of a legacy monolith application to a microservice, event-sourced architecture. The legacy application was a core business application, linked to revenue and developed over many years. Halting feature delivery was not an option.

Having identified a target architecture of around 30 services, with a migration plan for each, the strangler pattern provided the ability to manage the transition and test in production. 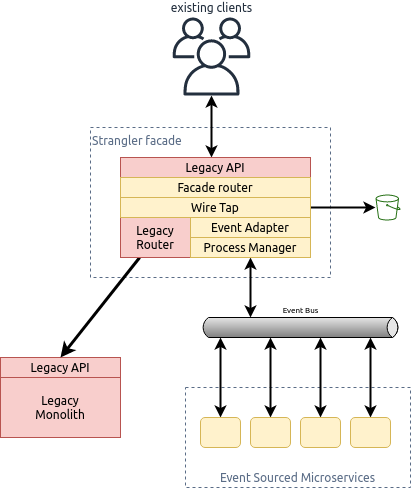 The strangler facade was designed to match the existing legacy interface. In the long term it wouldn’t be fit for purpose, or fully realise the benefits of the re-architecture. But for the purposes of the migration, it isolated the amount of change required and enabled experimentation. API re-design and migration was planned as a subsequent activity. For legacy requests, the facade provided a direct pass through and response. For requests routed to the re-factored service, the facade used the adapter pattern to translate the request/response to the new event structure and a process manager handled orchestration with the event bus to convert the asynchronous messaging into request/response.

Using the strangler pattern, the team were able to effectively begin a complete re-architecture of their legacy application, whilst following continuous delivery for both the legacy and new re-architected microservices. Dark-launching the new microservices, utilising wire taps incorporated into the strangler facade meant the whole process could be de-risked by testing in production, without any impact to end users.

The strangler pattern, particularly when paired with complementing patterns such as wire-tap, provides a low-risk mechanism to enable large scale refactoring. It can be applied in a variety of situations where re-architecture is required.

In some circumstances the strangler pattern is overkill. When breaking up a monolith, if clear APIs are already available, a “slash and burn” technique is simpler: duplicate the code, establish deployment boundaries and then delete unused code.

Where your system already has support for migration patterns such as versioned APIs and multi-version deployment flexibility then the strangler pattern is not required: planning for continual redesign is a better overall approach.

Large scale refactoring and paying down accrued technical debt is challenging. History has shown that big bang re-architecture is risky and liable to failure. Instead an incremental approach preferred. The strangler pattern provides one such tool to help with managing the complexity of refactoring and re-architecture. By making smaller changes, with appropriate feedback loops you can make a fundamental technology shift whilst maintaining uptime and avoiding stagnation.

If you want to move faster and tackle your technical debt, please get in touch, and lets see how we can help.